The Chronicles of Narnia- C.S. Lewis 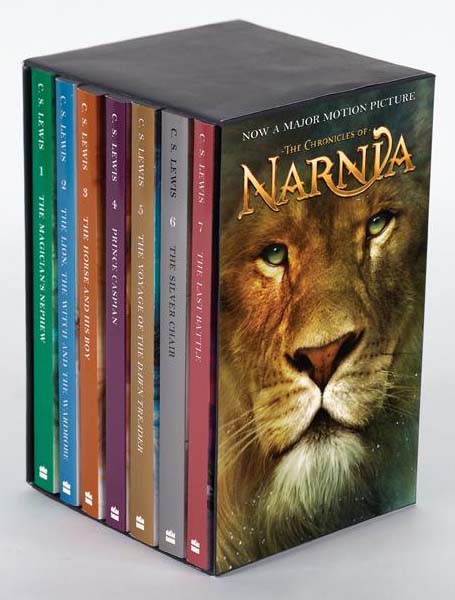 Hello again, friends. After reading Fates and Furies I decided that I needed to get back to the list, at least for a couple books anyway. I decided that I finally needed to tackle The Chronicles, especially with The Magician’s still fresh in my mind. I’m sure we all remember my rants about the similarities between the two and by jove if it gets even worse!

Now, one might ask, “But Emily, how did you know about the similarities between them if you had never read them?” The answer is simple. Back in middle school when I was living in Texas I had the very esteemed opportunity to play young Lucy in The Lion, the Witch, and the Wardrobe. So, I knew the bare bones of it. But now, after tackling all seven I have come to realize that there a similarities not only to Magician’s but to a great many books.

I will not dismiss this series out of hand. I understand the weight they have in the literary world and beyond, but I will say that they weren’t my favorite. I do wish I would’ve read them when I was younger; a phrase I’ve heard from many adults whom I’ve run into while reading the series. Another is how chock full of religion it is. I didn’t see it at first. Yes, in the first book it is hinted at, but it’s not until you get in to the last three that you hear chants of “Aslan forever” or how they blatantly call him a god.

Speaking of “the last three book” there is much debate about in which order you’re supposed to read the books. There is the “Publication order” camp and then there is the “The way he intended it to be read” camp. I went with publication order and I’m happy I did. I felt it had more of a flow and the end of The Last Battle put a nice stopper on the whole series. Even though I was not quite sure where A Horse and his Boy was going or even the real purpose of it.

I did actually enjoy going to Narnia every night. Most of the characters are endearing and you are on their side on every grand adventure. Since every book seems to have the same outline. Narnia is in trouble. Kids are summoned. Kids go on adventure to save Narnia. Narnia is saved. Kids leave. My favorite adventures have to be in Dawn Treader and Silver Chair mostly because I fell in love with Reepicheep (who doesn’t) and Puddleglum. Puddleglum reminded me so much of an Ent from The Lord of the Rings, albeit more fast paced than the slow moving trees.

Though the similarities run deep, they do say that “imitation is the highest form of flattery”, I was completely taken a back when two children pop up into the wood between worlds after putting on magic rings and emerging from a sort of pond. Not unlike, a few young adults who find a button and end up emerging from a fountain in the middle of an abandoned land.

I’m glad I finally read them, it’s been a long time coming. Will I read them again? Probably not. Maybe, just maybe, I will read a few of them to my children some day. I will tell you one thing…I will never look at lamposts the same way again.

Further up and further in.